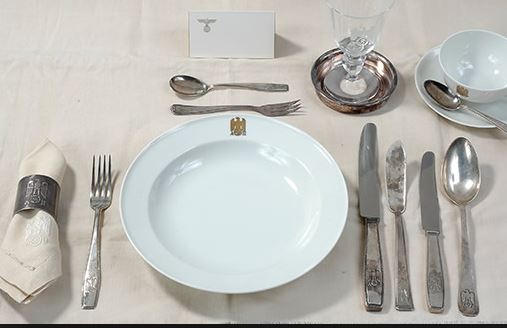 A TASTE OF EVIL – A novel

By Tony Aspler and Gordon Pape

Fans of Gordon Pape’s and Tony Asper’s 80+ previous books will be surprised and delighted with this unique and natural collaboration between two bestselling nonfiction authors. Historical war fiction readers will appreciate the authentic setting and characters that pull you emotionally into the novel. It’s a novel that reads like a movie script!

The plot covers the time frame from Sept. 1, 1939 to the fall of Berlin in May 1945. Adolf Hitler had several female tasters who sampled every dish put on his table. This is the fictionalized story of one of those women and her association with Albert Speer, Hitler’s architect and Minister of Armaments, as they become linked by a plot to assassinate the Nazi leader.

The book begins at the von Bismarck family home in Potsdam on the day Germany invades Poland. Concerned for her safety, her parents send Gretchen to a private school in Bern, Switzerland for what they hope will be the duration of a short war. However, Gretchen is caught innocently taking pictures of the area around the school and her paranoid Swiss headmistress, fearing the country is Germany’s next target, sends her home.

Meantime Albert Speer, whose story is interlaced with Gretchen’s, gears up the German war machine and accompanies Hitler to Paris after the fall of France to celebrate the victory.

Back home, Gretchen persuades her reluctant parents to use their influence to get her a job in the kitchen of Berlin’s prestigious Hotel Adlon, where she has always wanted to apprentice to be a chef. The hotel is only a few blocks away from their Berlin apartment. She gets a job as a dishwasher but her good looks and obvious culinary talents earn her quick promotions. One evening she is pressed into service as a waitress at a private dinner that includes Himmler, Goebbels, and Goering. Goering is entranced by her, calling her “a vision of Aryan youth” and instructs his photographer to take her picture with the group. The photo later appears in the newspaper Das Reich. Her birth mother, a Jew who has never had contact with her daughter except from afar, sees it.

Goering is so taken with Gretchen that he prevails upon Albert Speer, who knows the family (her father is an architect in Speer’s firm), to offer her a position as one of Hitler’s food tasters. She is told that the appointment is top secret and that she must swear never to tell anyone what she is doing. The job will involve travelling with Hitler on occasion, including to Obersalzberg and Wolf’s Lair. After much soul-searching, she agrees to submit to an onerous test to determine if she qualifies. Hitler himself shows up to witness the test. He is about to taste from one of the bowls of soup when she knocks the spoon out of his hand. It turns out it was poisoned, to test the candidates, and Gretchen smelled it. She gets the job.

As all this is happening, the war is taking a turn for the worse, with losses on the Russian front mounting. Speer is learning more about the concentration camps and the growing use of gas chambers for mass murder. Although he is loyal to Hitler, he is becoming increasingly concerned.

Also concerned is Gretchen’s birth mother, who had once worked in the von Bismarck home. When the family found they could not have a child, it was arranged that Krista would carry von Bismarck’s baby and surrender it to them at birth in exchange for a large amount of money and a letter of reference. She had to agree never to disclose that she was the mother.

Now, with Jews being rounded up and sent to the camps, Krista makes the hazardous trip back to Berlin to tell her daughter the truth and warn her of the danger she is in. Gretchen cannot believe what she is hearing and confronts her parents. In an emotional scene, they confirm the story.

As a result, Gretchen becomes much more sensitive to stories she hears about the treatment of Jews and other minorities. Because of her position, she overhears snippets of conversation and catches glimpse of documents that seem to verify the truth of the rumors.

In July 1944, Gretchen travels with Hitler to Wolf’s Lair, where an important strategy meeting involving many of the country’s top generals is to be held. She is in the kitchen when a thunderous explosion rocks the compound. Once it is clear what happened, she helps to tend the wounded, including Hitler himself. In the aftermath, she witnesses Hitler’s rage at the perpetrators and his merciless revenge. She is appalled by his cruelty and vindictiveness.

Back in Berlin, contacted again by her mother to be told that her maternal grandmother, Krista’s mother, has just been sent to Ravensbruck, where she will likely be executed. Desperate, Gretchen does two dangerous things. First, she asks her father to intercede with Speer to obtain her grandmother’s release. Second, she visits the long-time family doctor, a Jew, and tells him of her outrage with Hitler and the decision she has reached to poison him. At first the doctor is reluctant, remembering the Hippocratic oath. But then he thinks of the thousands of people dying in the camps every day and agrees to help her. They develop a plot that will necessitate Gretchen ingesting the poison herself.

In the midst of this, Kurt and Gretchen become lovers. She confides some of her fears to him and he appears to be sympathetic to her views.

As the war continues to go badly, Albert Speer is also coming to the conclusion that Germany would be better off without Hitler, albeit for different reasons. He sees the country being destroyed through Hitler’s scorched earth policy as the German military suffers more defeats and Allied bombing attacks escalate. Finally, he picks up the phone, calls the maker of the gas being used at the camps, and asks to have a sample of the latest version sent to him.

In the winter of 1945, Hitler retreats to his Fuhrerbunker, 30 feet below the Reich Chancellery. Speer sees an opportunity to carry out his plan by pumping gas into the ventilation system, killing everyone inside. But Martin Bormann, who steps up security patrols around the perimeter, thwarts him.

That leaves Gretchen, who has become Hitler’s last food taster. She is required to live in the bunker much of the time. Kurt is also there, as one of the Hitler Youth guards. She has told him of her plan and he is concerned for her life. He begs her not to do it, telling her he loves her and doesn’t want to lose her. The war is almost over, he says, and Hitler will be killed or captured anyway. However, Gretchen is determined. She administers small dosages of poison once a day to Hitler, and he steadily deteriorates both physically and mentally, becoming increasingly unhinged and irrational in the process. Despite purging her body of the poison she ingests, Gretchen’s health also declines. She loses weight and her skin takes on a yellow pallor. Kurt grows desperate to save her. Gretchen tells him that her friend Shona’s father has a clinic in Switzerland. If they can escape there after Hitler dies, they may be able to cure her. But she will not leave until Hitler is dead.

On one of her short excursions from the bunker, she goes to her parents’ home, with Kurt escorting her. They are shocked by her appearance – she is gaunt and pale. Gretchen tells them what she is doing. Like Kurt, they implore her to abandon the idea and save herself but she maintains her determination. She is prepared to die if necessary to rid the world of Hitler. But she tries to mollify her parents by telling them the father of her friend in Switzerland runs a highly respected clinic and she will try to get there for treatment when Hitler is dead.

On April 20, 1945, Hitler celebrates his 56th birthday by emerging from the bunker to officiate at a ceremony at which Iron Crosses are given to members of the Hitler Youth for their defense of Berlin. Kurt is one of the recipients. He sees that Hitler is disoriented, unsteady and shaking and he knows he does not have long to live.

The Russians are now at the gates of Berlin. Hitler has gone mad from the effects of the poison. He condemns everyone for the failure of the war, orders the summary execution of some of his closest confidantes, and demands that Speer destroy all the remaining industrial plants in Germany.

On April 30, 1945, Hitler dies, along with Eva Braun. The story is put out that he swallowed cyanide and then shot himself while she died by poison. Their bodies were burned so this could not be verified. The reader is left to decide whether they both actually died as a result of Gretchen’s poisoning.

In the chaos of the bunker on that final day, Kurt finds Gretchen, who is very weak, and tells her his uncle, Speer, has arranged passage for them to Switzerland if they can get to Templehof Airport before the Russians take it. He knows of a series of tunnels about a mile away that lead to the airport. Together, they flee the bunker, find the tunnel entrance and make their way through a dimly lit passage where rats scurry away from them. The exit door to the tunnel is partially blocked but Kurt manages to force it open. They run through the almost deserted airport to the tarmac where a twin-engine plane is warming up under a sky lit by exploding shells. Gretchen is staggering, weakened by the poison. Kurt lifts her in his arms and runs towards the plane, where the pilot is frantically beckoning them to hurry. Just as they reach the door, a Russian tank appears at the end of the runway. They tumble on board, the door is slammed behind them, and the pilot revs the engine, heading the plane straight towards the tank, which is trying to maneuver into position for a shot. Just before they collide the plane lifts off, clears the tank by a few feet, and disappears into the night sky.

Tony Aspler is an internationally known wine writer and critic. He has been writing as a columnist for the Toronto Star and for a number of international wine magazines for more than thirty years. Tony is the author/co-author of more than 25 books, including nine novels, three of which were written with Gordon Pape.

He is a member of the Order of Canada, a recipient of the Royal Bank Business Citizen of the Year Award, and the Queen’s Jubilee Medal and is involved in several charities.

Gordon Pape is the author/co-author of more than 50 books, a columnist, and investor. Most of his books focus on personal finance but he has also co-authored three novels with Tony Aspler and three books of Christmas trivia with his daughter, children’s author Deborah Kerbel.

Gordon is the editor and publisher of the Internet Wealth Builder (IWB), The Income Investor, and The Canada Report and founding editor Mutual Funds/ETFs Update.  For many years, he was a TV spokesperson for CHIP. He is also a columnist for Zoomer magazine, The Fund Library, Insurance and Investment Journal, The Toronto Star, and GlobeinvestorGOLD.com and is a guest on radio and television programs across Canada.

A TASTE OF EVIL by Tony Aspler and Gordon Pape is represented by the Kelly Consulting Agency. For more information, please contact Lloyd Kelly at lloyd@kellyconsultingagency.com or in the message box below.