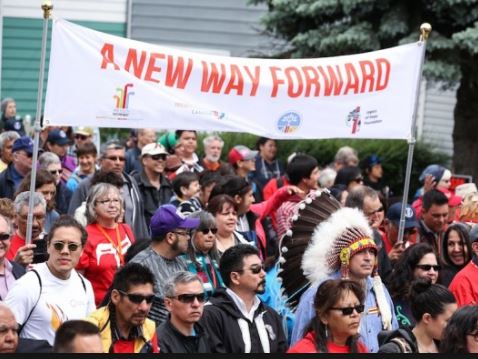 Canada, Once and for ALL:

A Settler’s Conversation on Reconciliation

Canada, Once and for ALL

A Settler’s Conversation on Reconciliation

The Governments of Canada have repeatedly made and broken so many promises for so many decades. Canada, Once and for ALL is a hard-hitting yet compassionate story of the realities of Canadian racism, complicity, and Indigenous suffering. Reconciliation is at a crossroads. Will Canada meet the challenges ahead that have been decades in the making and live up to all of the promise of unification with its indigenous people? This question has created much on-going debate, media attention, compassion and anger, but it doesn’t have to be this way. Canada, Once and for ALL will shape the discussion and become an indispensable aid to the public and political decision makers to act now and make significant progress with reconciliation. The time for action is now – it’s time for us all to demand that Canada act now.

Being born in Thunder Bay, Ontario, in 1995, may well prove to be the optimal place and time for anyone to have been born – someone who will fully grow up, develop awareness and become the social activist that this country needs to bring it together. Gerrit Wesselink has always been involved in bettering his community, and Canada, having spent the majority of his youth doing so. So you might ask – what can young people do to change Canada? Just watch!

This conversation, these experiences, and these stories are all presented from the perspective of an outsider – a settler – who has been invited into Mishkeegogamang. In Canada, Once and for ALL, Gerrit Wesselink paints a picture, a picture as he has come to understand it; naturally, it will not be the entire picture. Gerrit provides a broad view, as he talks about things that he does not completely understand; but does all of this to bring the reader through the profound lessons that Mish have been incredibly gracious to share with him. These lessons came in no particular order either – rather, though almost two years of working closely with Chief and Council on a number of projects that include stories drawn from northern and southern Ontario as well as from Manitoba, Nunavut, Alberta, and Greenland.

Gerrit argues, from a settler’s perspective, that Canada is foundationally unequal, and that we all have a responsibility in this conversation on reconciliation with indigenous communities. He compares how his families were better off, legally, than their indigenous neighbours; he explores the work he has done with communities across Canada and discusses the current challenges facing the city where he resides, Thunder Bay. Canada, Once and for ALL picks up where others, like Tanya Talaga’s Seven Fallen Feathers left off – including the recent revelations about institutional racism in the Thunder Bay police.

Excerpt from Canada, Once and for ALL

In 2010, the Island Lake communities made it obvious that they needed a coordinated addictions treatment strategy in the region to stop the threat of substance abuse in their community. They knew that there was a risk that things could get much worse, and they did. The government’s progressive view on marijuana invited new people, like Tina, to town – and her grip is killing people across the north. They needed a commitment then, and they still need one now. It is unacceptable that a community of fifteen thousand in Canada does not have access to running water, a hospital, or an addictions treatment centre. Canada has a responsibility to address this crisis – not only constitutionally – it caused this unexpected side effect, and should commit to dealing with all of its outcomes.

Unfortunately, the governments in Winnipeg and in Ottawa do not budge – they say they’re unable to do anything to help stop the methamphetamine crisis; even though the solution walked right up their steps and into their offices, dressed in regalia, clenching an Eagle’s feather across her heart.

Stan Beardy, Nishawbe-Aski Nation’s Grand Chief will write the foreword to Canada, Once and for ALL. Additionally, the former President of the National Inuit Youth Council has been asked to write an afterword both of which would expertly bookend this important and timely book.

How are there still so many First Nations, Metis and Inuit communities that are not being treated like humans – right here in Canada. For so many decades there have been countless promises made by one government after another, and yet, with every step forward, it’s two steps backward. This heart-warming short video illustrates so beautifully through the creation of a mural in Mishkeegogamang First Nation, Ontario, that we really can unite Canada, Once and for ALL.  www.youtube.com/watch?v=P_Og3IRMS04

Canada, Once and for ALL by Gerrit Wesselink, is represented by the Kelly Consulting Agency. For more information, please contact Lloyd Kelly at lloyd@kellyconsultingagency.com or in the message box below.