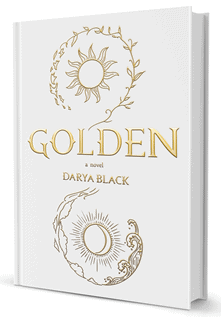 Once upon a time, there were two worlds. In one world lived a girl, and in the other, a boy. The girl’s world was golden, without hunger or lack, crime or war. The boy’s world was dark. And one day, they met.

Golden is an aspiring YA novel that blends science fiction with elements of historical and contemporary fantasy. Ripe with psychological themes, it explores body image, propaganda, and perhaps the most daunting question we face in the 21st century: how much are we willing to sacrifice to build a better world? Taking you an epic ride, Golden will haunt you long after you’ve read it.

Goldie lives in a world where hunger and poverty don’t exist, where marvellous technology has rendered money obsolete, and where humans have evolved extraordinary mental powers, granting them control over their own bodies. But these powers can backfire, and when Goldie’s grandmother develops a tumor from repressing a long-kept family secret, Goldie is willing to do anything to save her, even if it means becoming a freak of nature.

Albert lives in our world. When his mother dies on an archaeological mission, Albert’s life comes to revolve around his dad, Hector, who buries his grief in the search for the legendary Selene Island. But there’s something else hidden under the Mediterranean Sea. As Hector’s team uncovers an ancient Egyptian artefact, they unwittingly activate a lost technology that connects the two worlds. Albert and Goldie discover each other, realizing they are parallel world “twins.” But as their connection grows deeper, they are thrust into a conspiracy that threatens them both. To defend their worlds from a power-hungry plot, they must stop a secret society spearheaded by the charismatic and devious Master Bon. But when saving humanity means risking their lives, closing the gap between the worlds, and losing each other forever, they are left with one harrowing choice: to stay together, or to protect both worlds from destruction.

Golden will include the author’s original black and white illustrations, rendered in ink and marker, which speaks to the seriousness of the book while giving a glimpse into the grandiose settings of Goldie’s world—opera houses, futuristic buildings, sweeping cityscapes, and masked assassins.

Golden takes place in two worlds: our own planet and a parallel world that has advanced far beyond us. At first glance, Goldie’s world seems perfect. Everything is free and jobs are optional. Like every city in the world, Goldie’s village (Gimm, Kanada) is clean, prosperous, fueled by spectacular technology that responds to human thoughts, and governed by Philosophers. But a dark secret hides underneath the facade, and it’s up to Goldie to expose it.

Darya was born in a small mountain village in the Soviet Union but grew up in Finland, has lived in multiple countries and now resides in Texas. This has turned Darya into a polyglot, giving her stories a multicultural depth. Her love of philosophy made her pursue a Ph.D. in Metaphysics and complete a thesis on Ancient Egyptian symbolism, a passion that also inspired Golden.

Darya is also a motivational speaker with international experience in Mexico, United States and Switzerland. She co-hosts a local TV show in South Texas and holds a license as an alternative (drugless) therapist. For over 5 years, she has helped her local community through her television and radio appearances, talks, and workshops. She has also treated clients in the therapeutic setting with issues such as addiction, hallucinations, and anxiety. She has practiced traditional martial arts for over 10 years and has 4 years’ experience in teaching high school students. Her background in philosophy and psychology permeates her writing, creating subtle levels of meaning that may slip by the casual reader but will incite hardcore fans to dig deeper.

Golden by Darya Black is represented by the Kelly Consulting Agency. For more information, please contact Lloyd Kelly at lloyd@kellyconsultingagency.com or in the message box below.