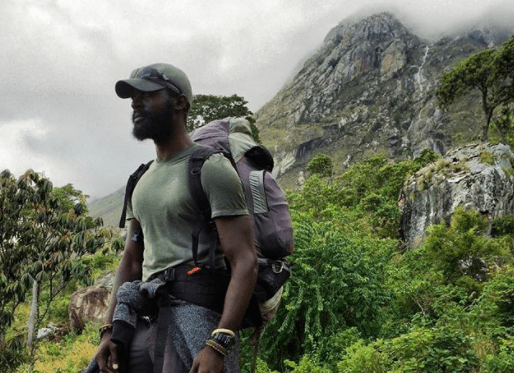 Survive: My Quest to Walk Across Africa

In late November 2015, Mario Rigby, a personal and group fitness trainer at the time, left everything behind and flew from Pearson airport to Cape Town, South Africa, where he would begin his amazing adventure, Crossing Africa. Two years later, he arrived at his final destination, Cairo, Egypt, following a 12,000 km trek northward across eight African countries, by foot and kayak.

Survive: My Quest to Walk Across Africa shares with the world Mario’s stories about the everyday lives of ordinary Africans in an entirely unique way, all while experiencing the many rich cultures, environments, and wildlife of Africa. Through the retelling of his extraordinary Crossing Africa expedition, Mario aims to push for diversity in exploration and adventure sports.

Indeed, Rigby saw some of those problems on his journey, but it’s the incredible warmth and compassion from so many people he met that left the biggest impression on him. He contracted malaria, kayaked 550 km across Lake Malawi for two months, dodged bullets with government soldiers in a war zone, was attacked by wild dogs, and was jailed for several days near a small village, to name just a few of the many challenges he faced. Yet despite those challenges he pressed on, and in doing so, inspired countless people across the globe to confront their fears and chase their dreams.

Mario Rigby is a modern day explorer who recently completed a solo, two-year, 12,000 km trek from Cape Town to Cairo entirely by foot and kayak. Mario was born in Turks and Caicos Islands and spent his childhood in a small village near Stuttgart, Germany before moving to Toronto, Canada at age 16. He has 3 more major treks planned over the next 5 years and will be raising awareness by reaching out to celebrities, sponsors and through crowd funding campaigns. http://www.mariorigby.com/

Social Media: On Mario’s two-year trek walking and kayaking from Cape Town, South Africa to Cairo, Egypt he shared his experiences on social media to inspire people across the content, and around the globe, to get out, be brave, and see the world.

Survive: My Quest to Walk Across Africa by Mario Rigby, Adventure Explorer and co-author Donovan Vincent, is represented by the Kelly Consulting Agency. For more information, please contact Lloyd Kelly at lloyd@kellyconsultingagency.com or in the message box below.