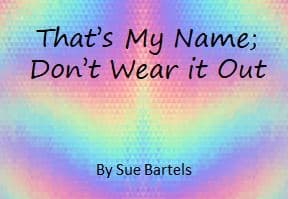 THAT’S MY NAME, DON’T WEAR IT OUT: A Novel by Sue Bartels

“A coming of age story that’s pure eighties nostalgia with a hell of a teenage love triangle and a dark, feminist twist”

Jean Richter may have entered her rural high school during the perfectly pastel pop-loving eighties, but she calls herself a head banger and lives in glam rock t-shirts, black jeans, and skull necklaces. That is until Scott, a punk-rock kid who’s a military brat and her only intellectual equal, enters her world. Later she meets Corey, a poet and motorcycle-enthusiast, who provides stability to Jean’s life, but not fulfillment. As we travel with her on her journey through the endless halls of high school, a secret monster lurking in her past leads her to make choices that will puzzle the reader. The novel wraps up in a climax that only the trials of teen-dom and the stresses of leaving home can produce.

We meet Jean in 1980 as a precocious eight-year-old, but quickly jump to 1985 as she enters grade nine with the firsts of the early teen years: first kisses, first dates, and first jobs. Jean joins clubs, tries new sports, and most importantly, makes new friends. Strong friendships get her through the tumultuous teens, though there are betrayals as well because boys inevitably get in the way. Saying just the right thing to a boy you like when he sidles up to your locker is paramount to the young women who spend hours on their corded home phones discussing the nitty-gritty details of each crush.

Jean lives in a tiny village in the middle of nowhere and during the long, hot summers, we feel the tedious boredom of being stuck hanging out with the same group of kids that she grew up with. They spend their time pooling their money to buy candy at the store, biking along the pitted gravel roads of the countryside, and necking in basement rec rooms with music blaring in the background.

Yes, the music, oh the music. Pop, new wave, glam rock, post-punk, heavy metal, goth; they all took hold in the eighties. The invention of cassettes made music portable and everyone had a walkman in the pocket of their cargo pants, a ghetto blaster on their shoulder, and a ton of mixed tapes jumbled up at the bottom of their knapsacks. Jean’s friends start a band of their own and play in skeezy bars and of course, at tacky school talent nights.

Jean’s love life is pretty screwed up. A boy has a crush on her, but it’s not reciprocated. She humors him, worried that no one else will ever like her more than a friend; that is until Scott comes along. She falls head over heels for the rebellious new kid. After a couple false starts, they have a secret relationship until she breaks it off when he lets her down in a fundamental way. She meets Corey and they start dating, but something is missing for Jean. Fast forward a year and she seems to be in a relationship with both men. Jean struggles to figure out the difference between love and being in love; finding someone she can trust and whether she can trust herself.

As high school marches on, the neighborhood gang starts drinking heavily, using drugs, and trying to round second and third base. Then the parties begin. They trash any house with an absent parent or end up at bush bashes, leading to drinking and driving, non-consensual sex, and teen pregnancy at an early age.

Slowly revealed through memory flashbacks, Jean is haunted by a monster, linked to a first person narrative of a character named Joseph. Jean is emotionally disconnected from her parents, but it is unclear why until we near the end of high school. She seems quite naive, but experienced at the same time as we discover that her first sexual experience is not technically her first time.

As the teens ponder future vocations and college deadlines loom, their stress peaks. Scott and Corey have a head-to-head showdown, Jean grapples with suicidal thoughts, and the mystery of the monster is revealed with a catastrophic event. Jean must figure out what to do with her life, with or without the men.

The working title is THAT’S MY NAME, DON’T WEAR IT OUT because of the theme of identity that Jean wrestles with as well as the fact that Jean and Scott say it to each other a few times in pivotal moments. The eighties were ripe with catch phrases and colloquialisms, and it was fun to bring them to mind and realize just how much they occupied our adolescent language.

Jean’s story certainly has the nostalgia factor and fun-filled dialogue of a young adult novel, but with deeper, adult-minded themes. As neon as the eighties were, it had its dark side like high teenage suicide rates and normalized rape culture along with the silence and shaming surrounding it.

Furiously-typing fingers have their own ideas and short poems crept into the book, highlighting the young heroine’s inner emotional life and her great desire to express herself through verse. Though the book is fiction, the monster that I refer to in the story is indeed real to me. It’s why I wrote the novel. As my protagonist Jean says, we need to talk about the trauma in our past to free ourselves from it. Telling this story is also important for the next generation. I have a 15-year-old daughter and I’ve shared my past with her and keep communicating.

The novel ends in 1989 on a positive note as Jean comes-to-terms with her past and forges ahead to the college years, scarred, but stronger and ready to face the future. It wraps up with a breezy, satisfying epilogue for Jean set in 2015.

Sue grew up in the flat, humdrum Ottawa valley and graduated Algonquin College’s journalism program, scoring the coveted Layout and Design Editor in her second year. Sue then moved on to attend Trent University because she finally got in, earning an honours English degree with a minor in classical studies.

She landed a job at the height of the high-tech boom to become a public relations shill, collecting big bucks and a pension, but having to endure nylons and pumps. Sue had her first darling baby boy and then a cherub of a little girl. Downsized on maternity leave, Sue and her husband made the decision to downsize their life as well by moving North, settling in Parry Sound on the shores of Georgian Bay.

One day in paradise, she attended a party with a group of like-minded ladies who formed a book club. Thirteen years and 130 books later, they are among the thousands of women supporting the fiction industry. Sue and her husband decided to have two more kids. They blame it on all the fresh air and clean water. The boys are best buddies: scrambling over rocks, making swords out of sticks, and biking everywhere, reminding Sue of her childhood in the boonies.

Though her minivan is still stuffed with kayaks and boogie boards in the summer, and skis and toboggans in the winter, literary ambition caught up to her in the bleak midwinter of her bleak midlife. She typed a short story about a youthful misadventure and then another until she realized she was writing a novel.

Sue has spent much time banging out stories in a newsroom, laboured over the typical news releases, speeches, and website content of the corporate world, and more recently, lovingly managed the social media feeds for parent and volunteer groups. In her lifetime, she has amassed a treasury of short stories and poems, none of which she has attempted to publish- until now.

Sue has penned the first 100 pages of her next novel about an intern named Samantha who is living with several roommates in the nineties. THAT HIT THE SPOT has emerged as the working title, perhaps due to the fact that there seems to be a lot of sex and food in it already and isn’t that what being a twenty-something is all about? And, if there is the desire for more, then THAT’S NOT WHAT I WAS EXPECTING is also on Sue’s radar for a parenting novel. And for now – that’s it!

That’s My Name: Don’t Wear it Out by Sue Bartels is represented by the Kelly Consulting Agency. For more information, please contact Lloyd Kelly at lloyd@kellyconsultingagency.com or in the message box below.