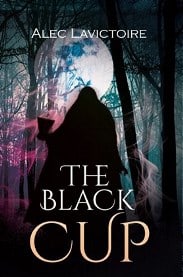 The Black Cup is Set in the Middle Ages, the story employs the classic myths and psychology of the fairy tale (the good witch, the evil king, orphaned children, dark woods, etc.) to examine some of the topics of our age (authoritarianism, free will, substance abuse, feminism) and how youth can navigate the often troubling revelations that accompany pending adulthood.

Twelve-year-old Max knows the King wants him dead. Born with his heart outside of his rib cage, Max is abandoned at birth by his father and raised by a kind witch who sacrifices all to keep him safe from the outside world. She too has known a life of being different from others and raises him to be equipped for any eventuality. Since abandoning his son and being gifted the Black Cup’s evil powers from an ominous figure deep within the forest’s darkest depths, Max’s father has ruthlessly ascended to the throne and become the most feared king in history. When he learns that the deformed baby he abandoned years ago still lives, and is now nearly a man, the King orders his troops to burn down the great forest and kill every living thing so that his rule will go unchallenged by his own blood.

Rather than run away from the danger, Max embarks on a journey toward the city to seek his father and prevent further destruction of the kingdom and its people. That’s when the witch, the King, and Max are set on a collision course that unfolds high atop the King’s castle as the world they have known, and the lives they have lived, will be changed forever.

The Black Cup reminds us that the ideals of youth may fade with age, but are never extinguished.  It is never too late to make a difference – to be the spark that leads to change. The novel examines where our inner strength comes from and how we harness it for good or evil. How do we find our place in a world where being different is a curse? Younger readers are sure to enjoy the adventure and peril while older readers will recognise the darker psychological themes being explored below the surface.

The Black Cup will primarily appeal to Middle Grade 10-14 year-old readers, as well as many older teen readers who will appreciate the authentic setting and fascinating characters that pull you emotionally into the novel. With the novel’s vivid descriptions, the scope of the adventure and the stimulating story make it a strong candidate for young adult crossover.

Fans of The Invention of Hugo Cabret would be delighted to read The Black Cup as in terms of tone, imaginative plot and characters, it could be compared. It’s clear that we’re in the hands of an important new storyteller as The Black Cup reads like an instant classic.

Alec Lavictoire is the father to two wonderful boys who have served as the inspiration for the hero of this tale. Some of Alec’s short stories have appeared in Fiction on the Web, 50 Word Stories, and Commuter Lit.

He is hard at work on his second novel about an epic adventure set in the Amazon jungle where past, present, and future collide and a brave 15-year-old holds the key to the mystery. Alec’s love of adventure and photography has taken him all over the world on extended backpack treks where he thrives on coming up against the unknowns hidden around every corner.

The Black Cup by Alec Lavictoire is represented by the Kelly Consulting Agency. For more information, please contact Lloyd Kelly at lloyd@kellyconsultingagency.com or in the message box below.